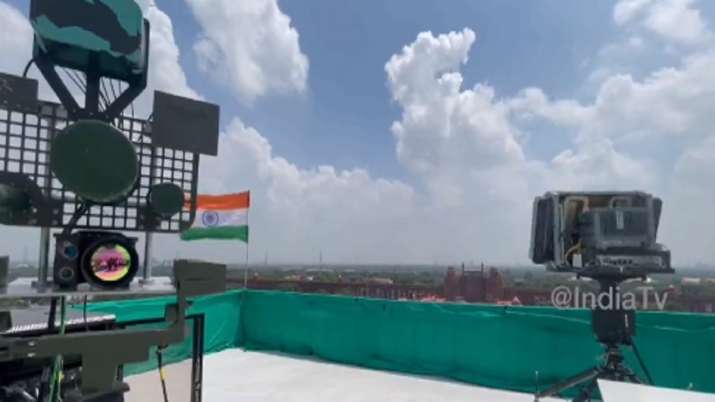 Independence Day 2022: Before the big celebrations on August 15, a counter-drone system developed by DRDO has been deployed near the Red Fort area in the nation’s capital to deal with any potential threat from small drones, DRDO said.

The system can detect and disable drones of any size within a range of about 4 km, DRDO officials added.

A DRDO official said the system has the ability to detect and disable multiple drones at the same time within a range of about 4 km using a jammer that has been installed nearby.

The Intelligence Bureau (IB) recently issued five new alerts, warning of a possible terrorist attack in the nation’s capital and several other cities ahead of Independence Day.

Law enforcement has been warned that terrorists may use IEDs during the flag-raising ceremony, which will be held at Red Fort on Monday.

With advancements in technology, terrorists can attack the Red Fort using flying objects. For this reason, it has been suggested that flying objects, including kites, be completely banned near Red Fort.

Considering all these threats, the Delhi Police has taken adequate measures on the ground to prevent any untoward incident.

“Kite catchers have been deployed with necessary equipment at strategic locations, which will prevent kites, balloons and Chinese lanterns from reaching the function area,” a senior official told IANS. Delhi police chief.

In addition to this, police personnel have been deployed to keep a rooftop vigil who will coordinate with the kite catchers. Two training and information cycles have been organized for them for this purpose.

“Announcements were made from religious places urging people not to fly kites in the area from August 13 to 15,” the official said.

From a security perspective, drones allow an attacker to hit any target in any location without any risk to the operator, and there is an ever-expanding area of ​​use, ranging from weapon racks to spy tools.

To mitigate and cancel the impact of the drones, the counter-drone system is implemented.

The system can detect, track and identify drones using multiple sensors, transfer information to associated systems and allow counter-techniques to deny them the intended operation (soft kill) or destroy them (hard kill).

Drone detection is done using radar and radio frequency based detection systems. Identification is done using an electro-optical sensor and COMINT. The soft kill is performed with RF jamming and anti-GNSS technologies, while the hard kill uses the aid of a laser-directed energy (DEW) weapon.

2022-08-14
Previous Post: Energy Management System in Industrial Market Outlook and In-Depth Analysis 2022-2028 with Types, Products and Key Players
Next Post: I-Day: With 1,000 high-resolution cameras, an anti-drone system, the Red Fort is transformed into an impregnable fortress